JUROR'S COMMENTS
"JOYFUL MEMORIES OF CHILDHOOD is electrifying.  Mickey panics and tosses mismatched game pieces into the air during his frantic escape from trouble.  The objects blast right out of the flat, two-dimensional world in which he is situated and into the viewer's space where they adopt a solid, three-dimensional appearance.  This striking and unexpected partnership between the two realms creates a complex and fascinating, visual playground that is impossible to resist.  The height of the blocks, the forms of the game pieces and die, the roundness of the marbles and the delicate shadows play against the level page beneath causing some initial confusion and trickery.  The viewer's perception toggles between an upright position favouring the comic book scene or an aerial view favouring the toys.  Paper, plastic, glass and wood contribute their own special attributes to this stimulating, explosive and consummate artwork." -- GALLERY RING 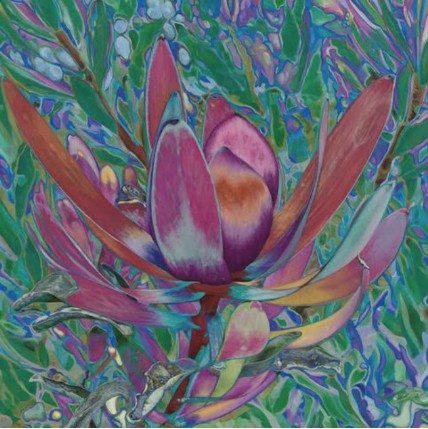